In this article we want to introduce the IceCube Neutrino Observatory. In a first part we focus on the input of KIT and DESY for the developments of SiPM-readout scintillation detectors for an extended surface array of IceCube and IceCube-Gen2.

IceCube is a unique detector, not only due to the discovery of very high energy cosmic neutrinos, but also as a multipurpose research facility. It also contributes to cosmic ray physics, dark matter searches and glaciology, and is therefore most suitable for multi-messenger astroparticle physics.

The IceCube Neutrino Observatory is located at the South Pole to observe the cosmos using optical modules deep in the ice and ice Cherenkov tanks at the surface (IceTop). 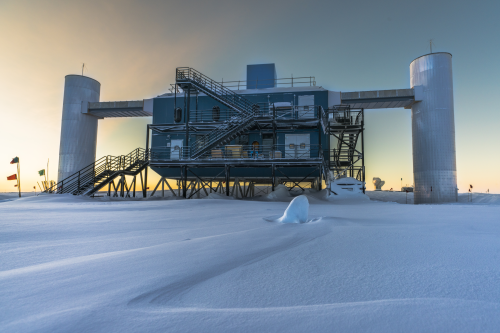 With 5160 digital optical modules, deployed in a cubic kilometre of ancient ice at 1450 m to2450 m depth, this in-ice component measures Cherenkov light generated by neutrino induced particles in the TeV energy range. The optical modules are employed with a ten-inch photomultiplier and corresponding electronics. 60 optical modules form one string and in total 86 strings are deployed.

The DeepCore subdetector with denser configuration lowers the energy threshold to 10 GeV and allows the investigation of neutrino oscillations.

IceTop acts as a veto and calibration detector for IceCube and is additionally used as a cosmic ray particle detector in an energy range from 300 TeV to 1 EeV. 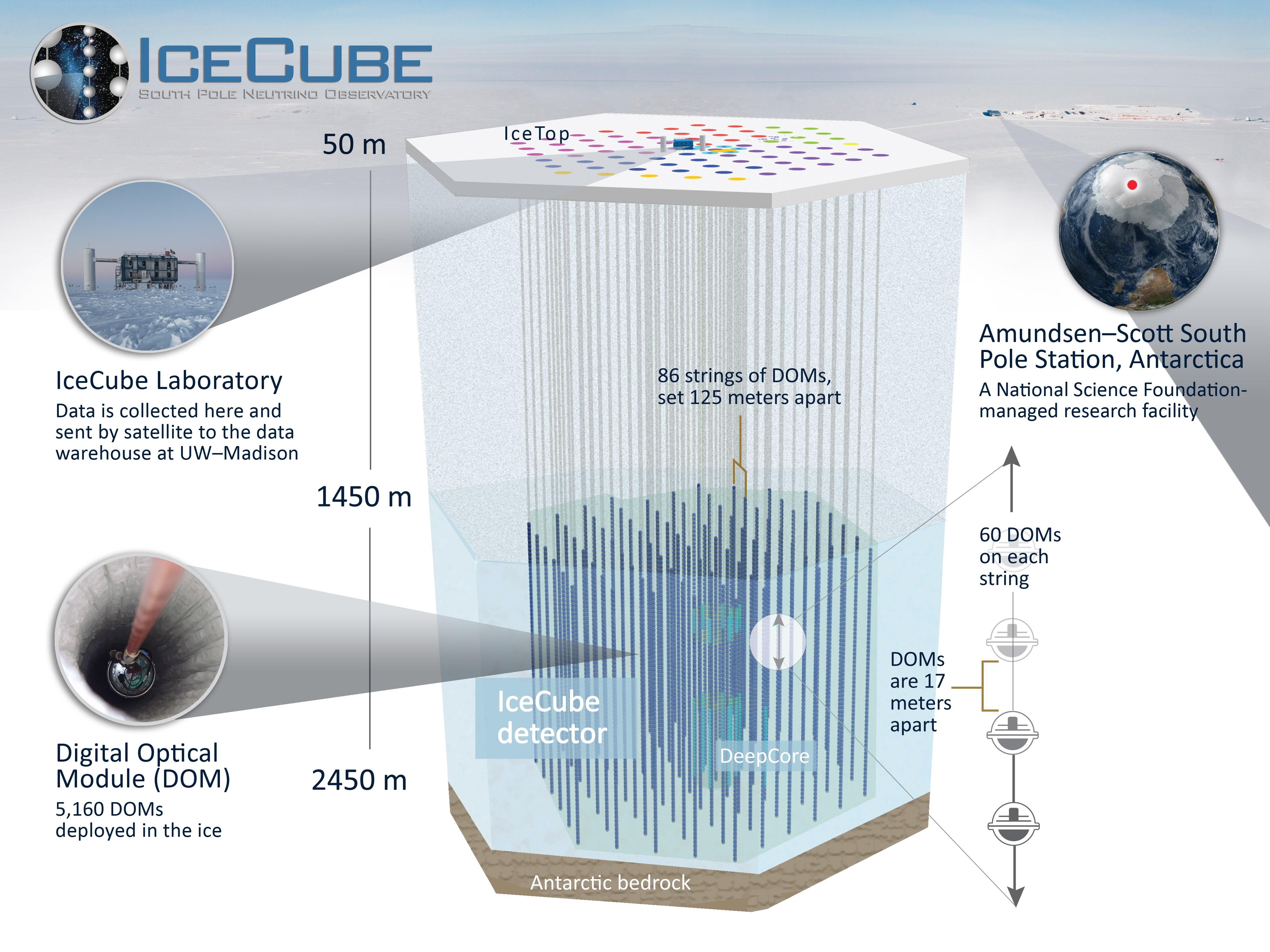 A collection of science highlights in the different fields can be found on: http://icecube.wisc.edu/science/highlights

Further information about the IceCube Neutrino Observatory is available at their website: http://icecube.wisc.edu/

Due to the excellent performance of the detector and the discovery of the astrophysical neutrinos the idea of a next-generation Neutrino Observatory was natural. The new IceCube-Gen2 collaboration is currently exploring the capabilities of such a detector. 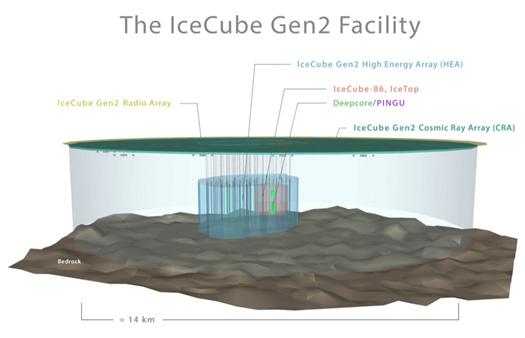 The future IceCube detector shall deliver statistically significant samples of very high energy astrophysical neutrinos, in the PeV to EeV range, and detect hundreds of neutrinos across all flavors at energies above 100 TeV. It includes the dense array PINGU, but also a radio enhancement like ARA is considered for detecting neutrinos above EeV. In addition, the in-ice instrumentation shall be complemented by a large-area surface component for veto issues and cosmic ray measurements.

At the moment several R&D projects are going on and in Part I we focus on the work of KIT and DESY on a future scintillator surface array and on Part II we show the developments of optical sensors for the IceCube Upgrade. 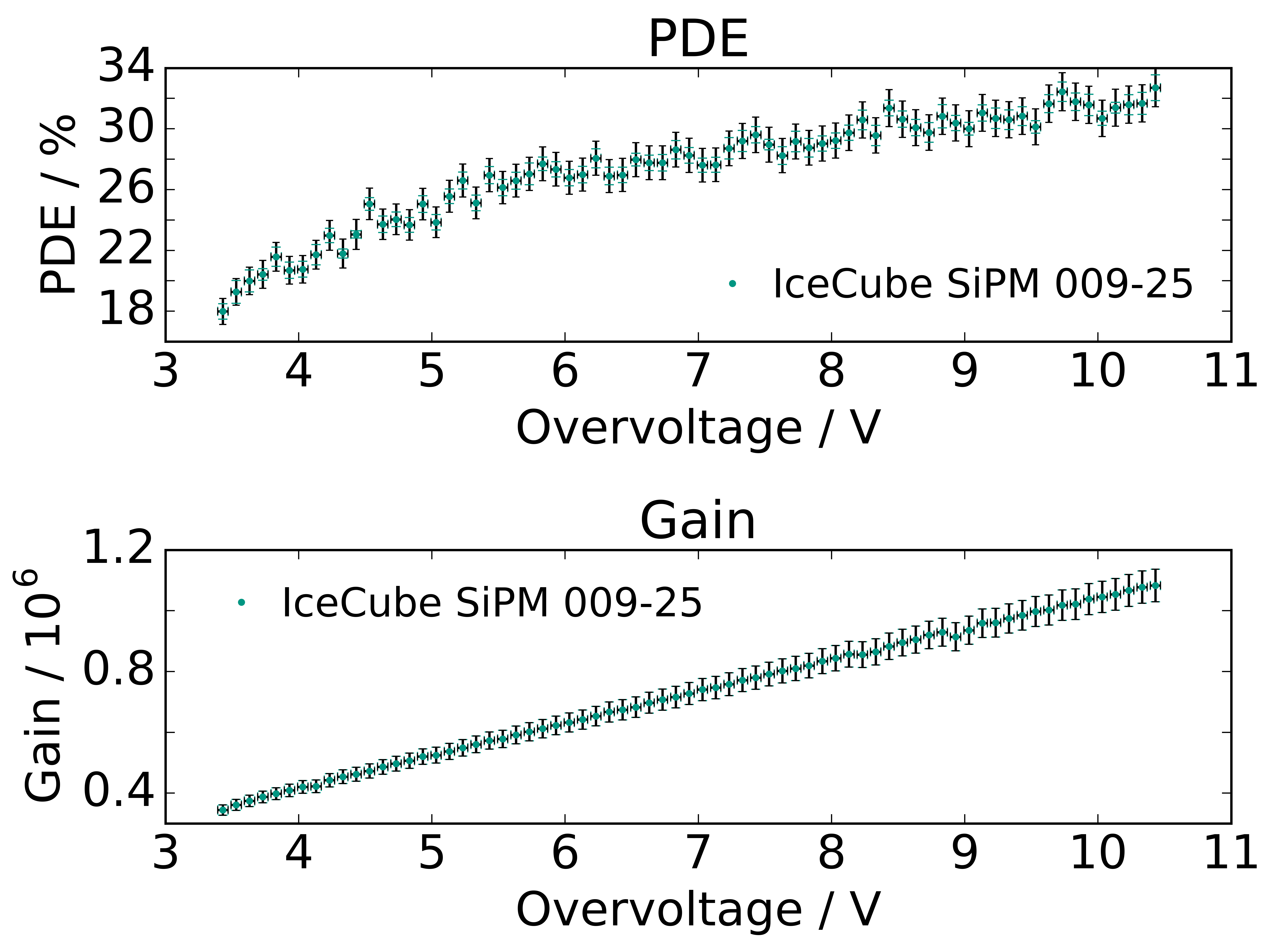 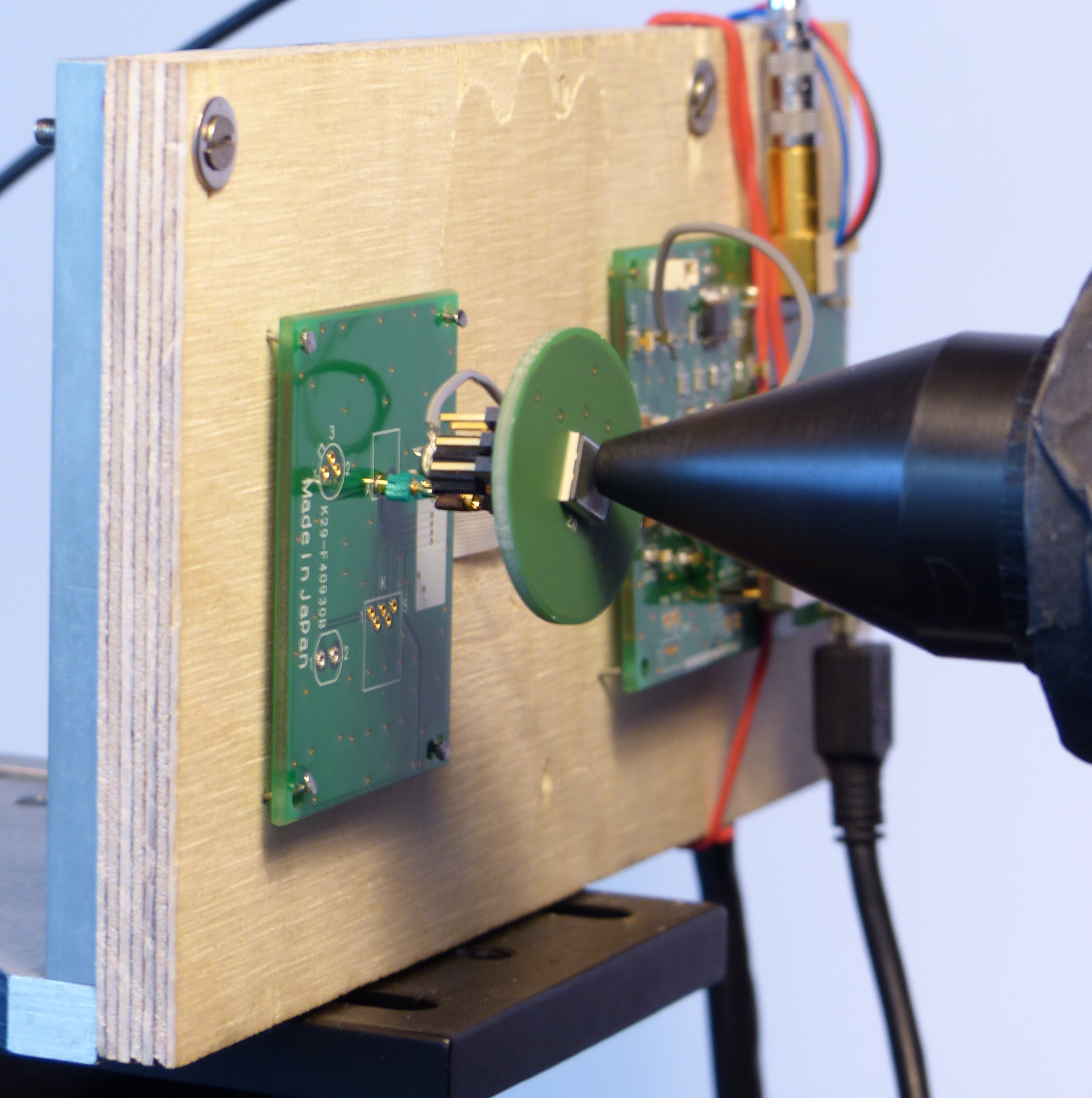 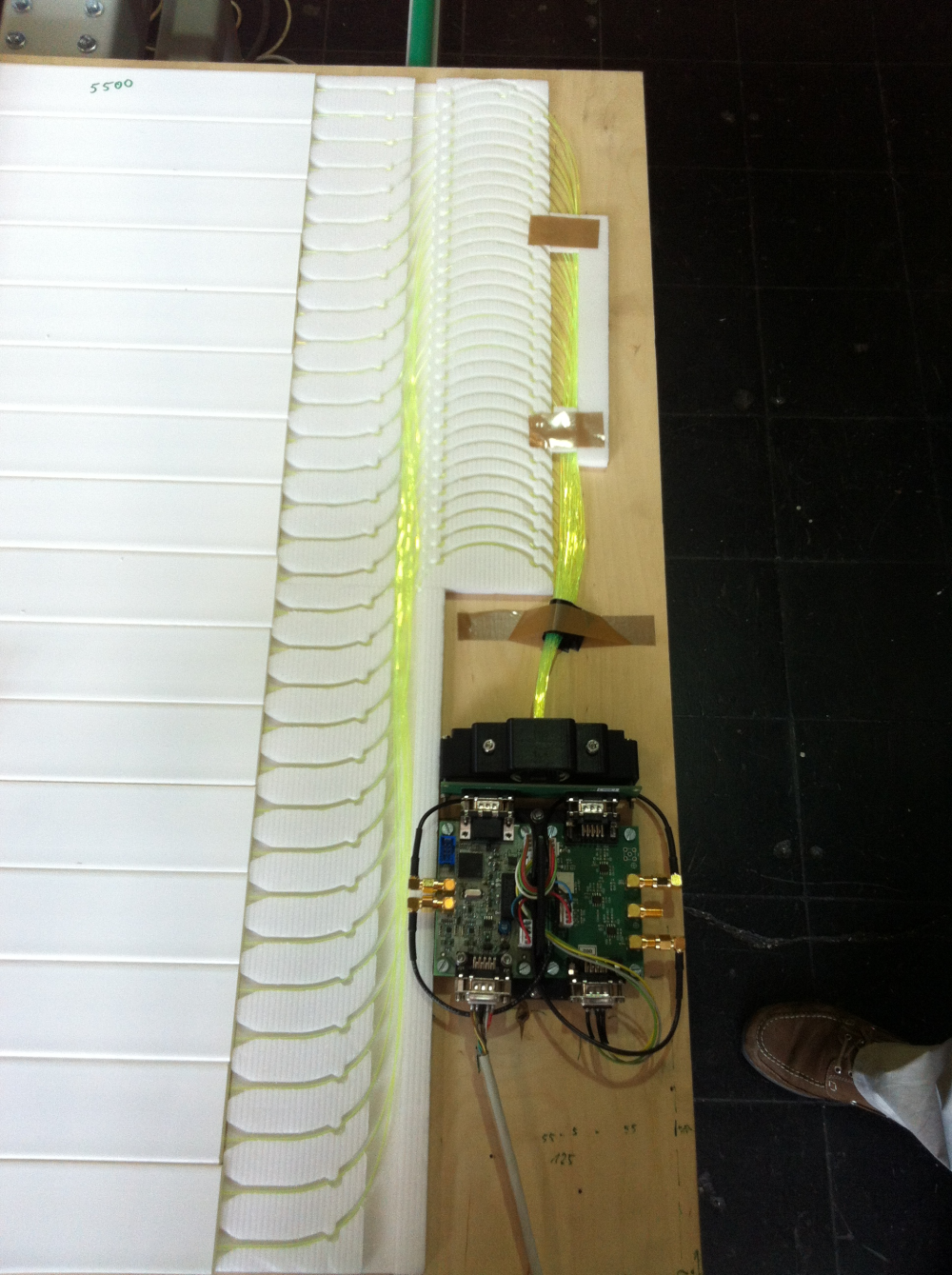 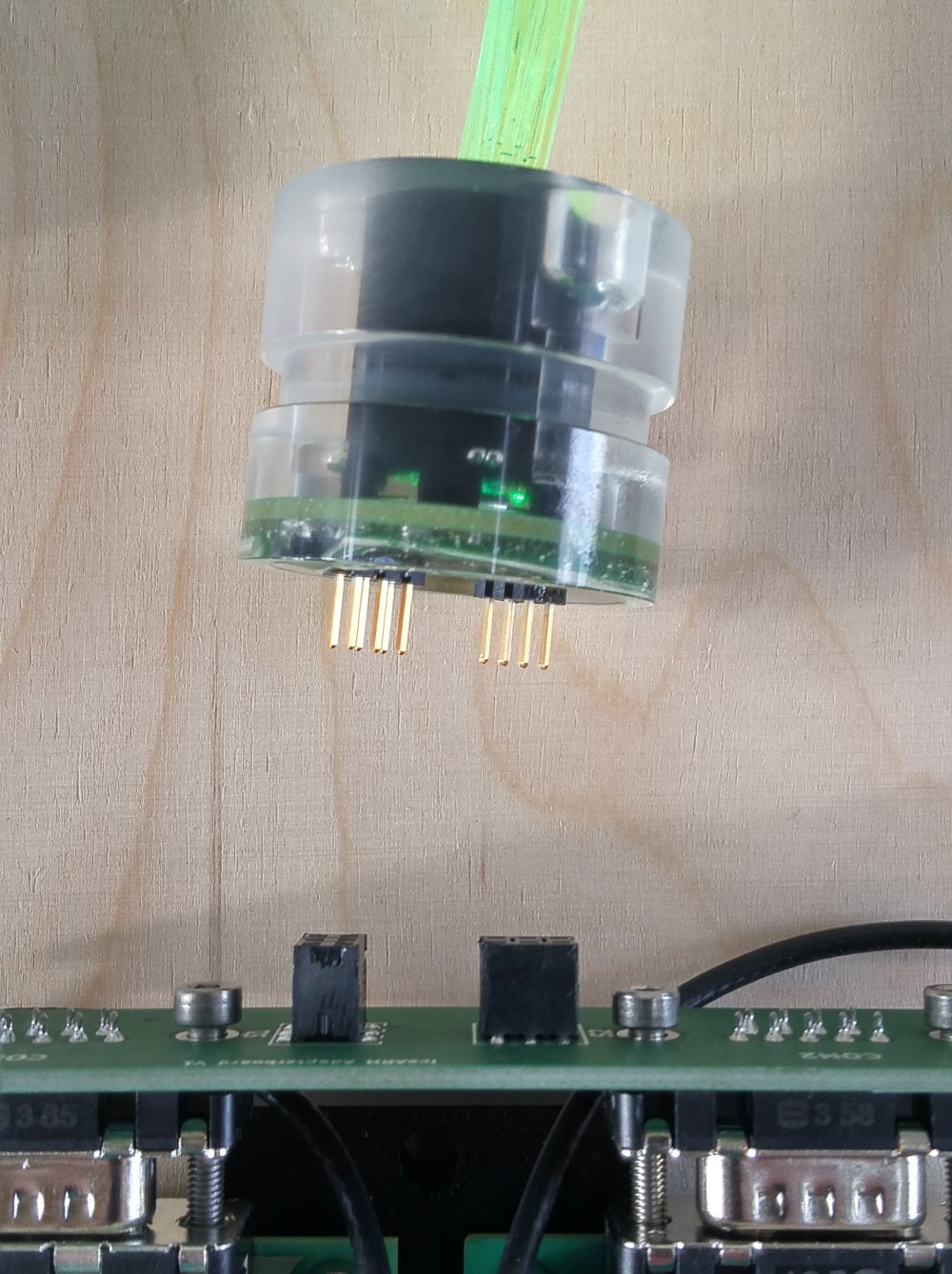 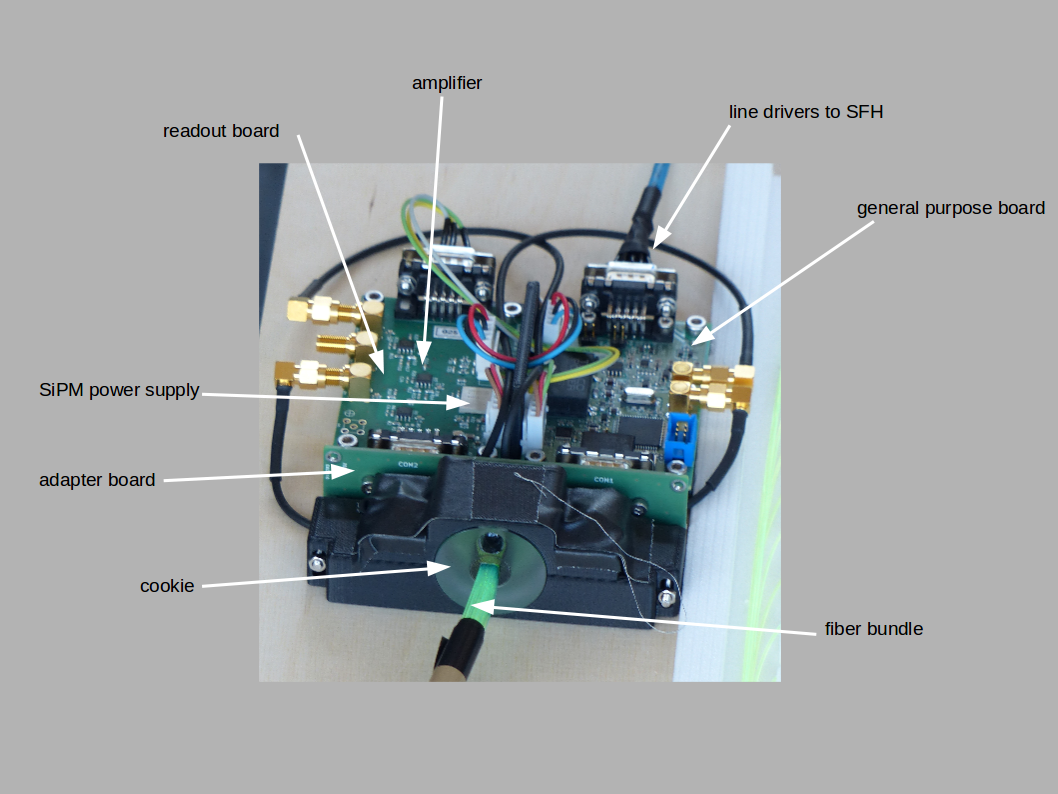 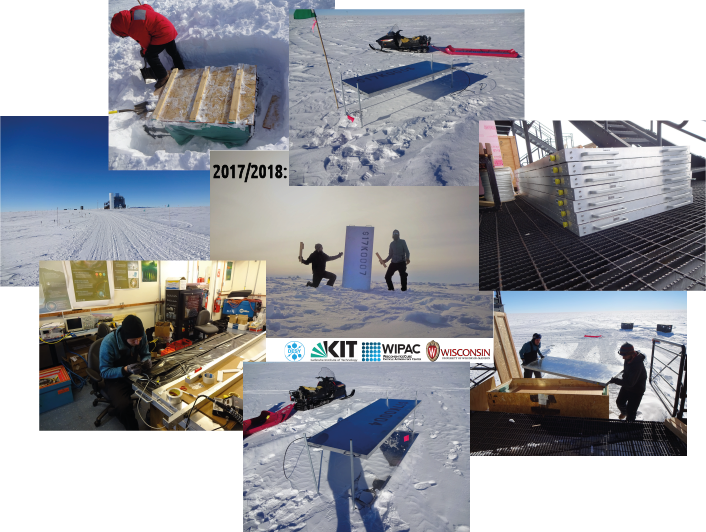 Optical Sensors for the IceCube Upgrade

The IceCube upgrade is an extension to the existing IceCube Neutrino Observatory at the South Pole. Seven strings of optical sensors and calibration devices will be deployed in a dense configuration in the center of IceCube, like shown below: On the one hand this reduces IceCube’s energy threshold to about 5 GeV, allowing precision measurements of neutrino oscillation parameters, especially tau-neutrino appearance and a test of the unitarity of the PMNS matrix. On the other hand the new calibration devices will enable a much improved in-situ characterization of the optical properties of the glacial ice, reducing one of the largest systematic uncertainties in high-energy neutrino analyses and allowing us to recalibrate ten years of existing IceCube data. Further, the IceCube Upgrade will serve as a R&D platform for optical sensors and calibration devices for IceCube-Gen2. The IceCube Upgrade project started on October 1st, 2018. Deployment is foreseen in the Austral summer 2022/23.

Several types of optical sensors (Digital Optical Modules (DOMs)) are developed for the IceCube Upgrade project. Low-energy neutrino events typically produce only very little light in the detector, requiring the sensors to be able to detect single photons with a large collection area and a low noise rate. Thus, all optical sensors are based on photomultiplier tubes (PMTs). High solid angle coverage enhances the rejection of atmospheric muon background and a segmentation of the photocathode area can constrain photon arrival direction, improving event reconstruction. 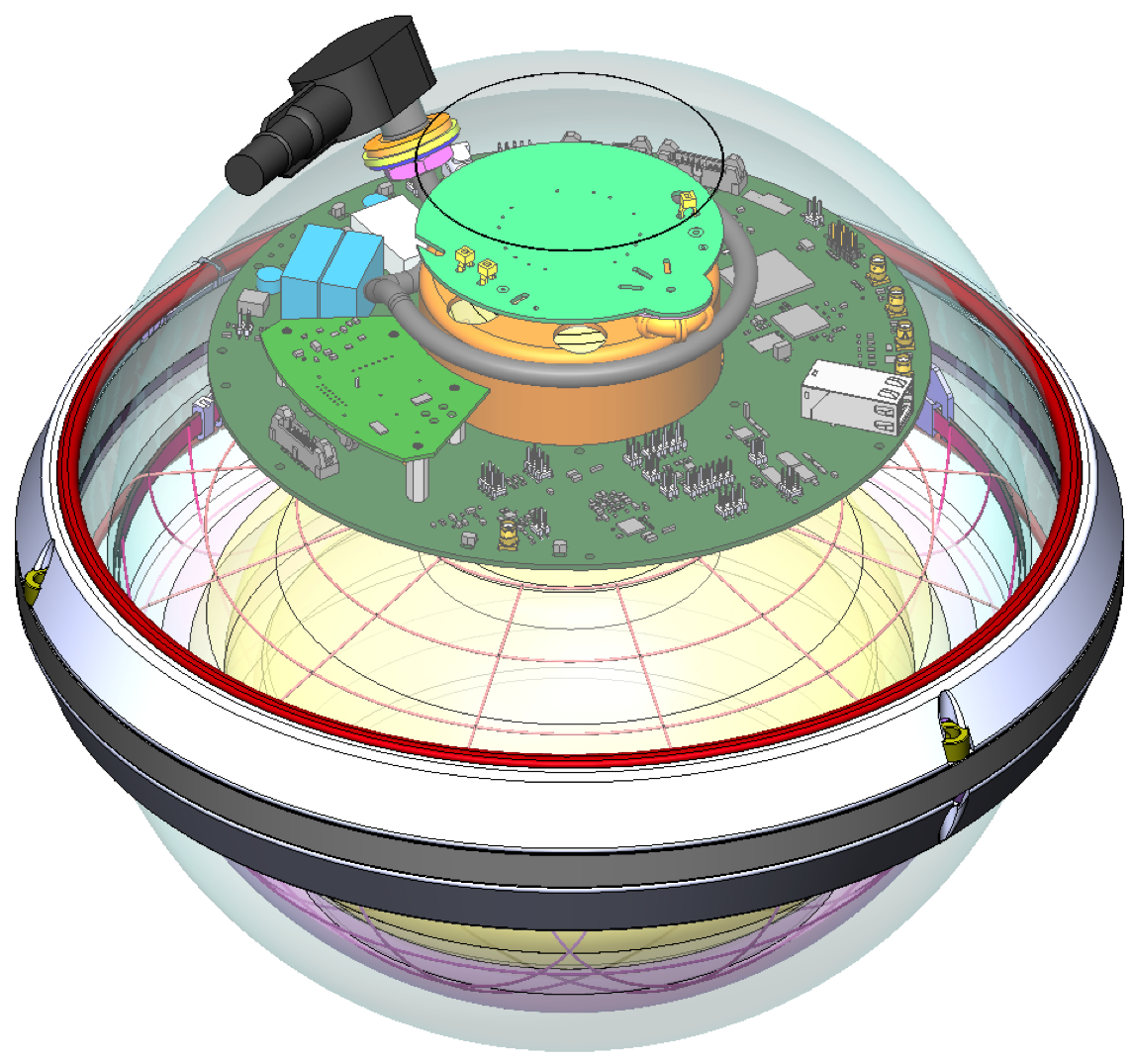 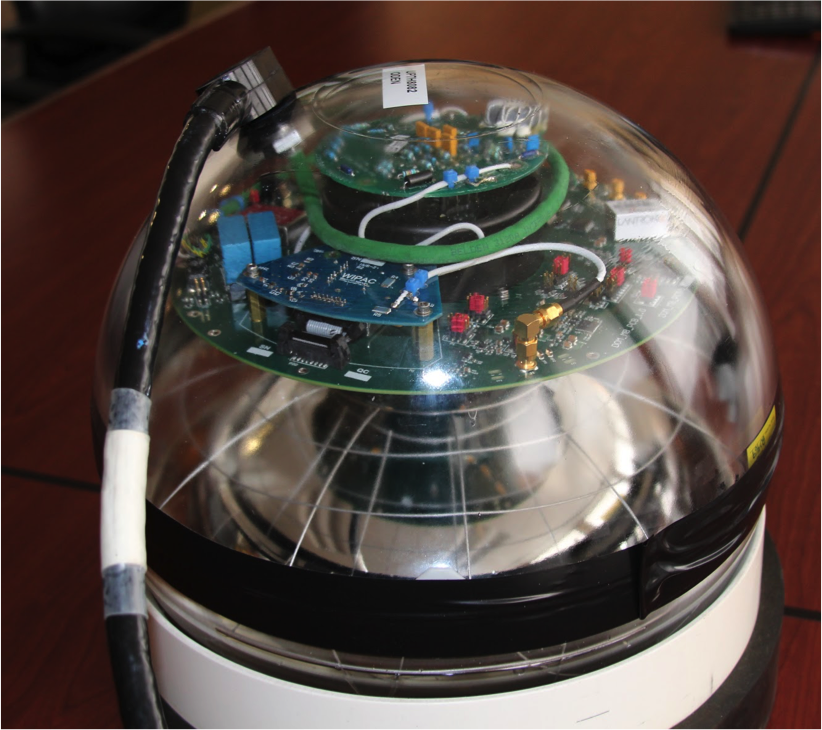 The PDOM is an enhanced version of the IceCube DOM. Qualifying components for suitability to be deployed and frozen in down to 2500 m deep ice is notoriously hard. The PDOM seeks to keep all the well-proven mechanical components (10-inch HQE PMT, optical gel, glass pressure vessel, cable penetrator, harness) of the IceCube DOM. The complex readout electronics of the IceCube DOM is largely replaced by a 14-bit ADC which is continuously sampling at 250 MSPS, allowing triggering and capturing of arbitrary-length waveforms in firmware. 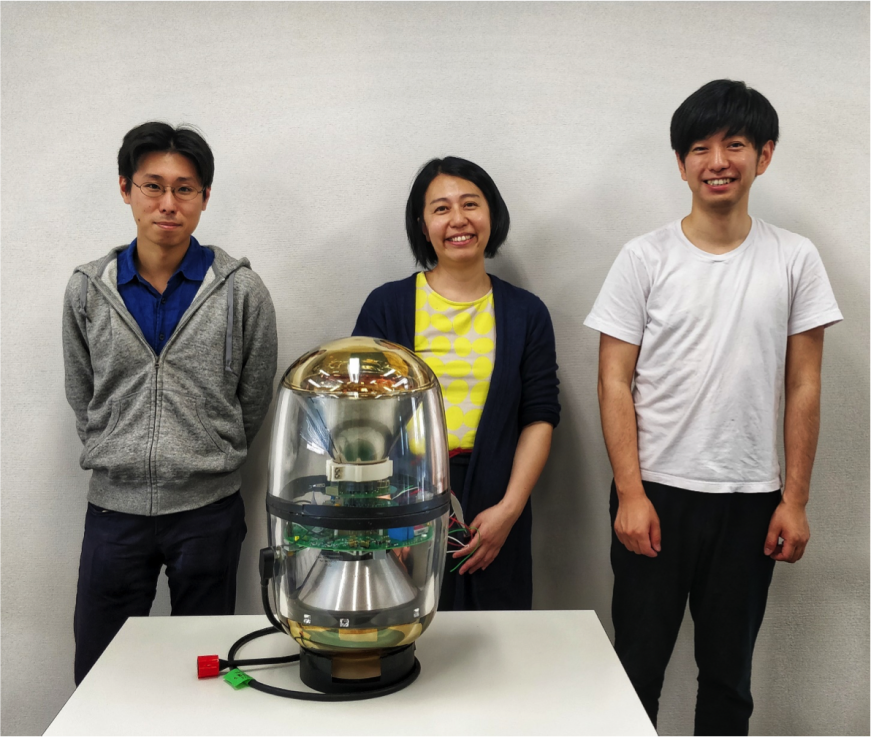 The “Dual optical sensor in an Ellipsoid Glass for Gen2” (D-Egg) uses two 8-inch PMTs looking upward and downward, increasing the effective area compared to the PDOM by about 50% and improving background rejection with the upward-looking PMT. The special design of the glass pressure vessel allows for low material thickness in the region of the photocathodes, increasing the light collection. Reduced potassium content in the glass production reduces background light from radioactive decays in the glass. The elongated shape of the module with a smaller diameter compared to other DOMs will allow in the future to reduce the diameter of the holes drilled in the ice, thus reducing deployment cost and time. The D-Egg readout electronics is adapted from the PDOM by adding a second ADC. The multi-PMT DOM (mDOM) is adapted from the optical module of the KM3NeT project. The mDOM houses 24 PMTs with a diameter of about 3 inch in a 14-inch glass pressure vessel. The advantages of this design are a large total photocathode area (about 2.2 times the effective area of a PDOM) with directional resolution, improved photon counting, and an almost isotropic sensitivity. Each PMT is read out individually. To reduce the power consumption of the module each channel has a sampling rate of 100 MSPS. The output of a threshold discriminator is used to timestamp the leading-edge time of each signal with nanosecond precision in a FPGA.

A R&D program is underway to develop new types of optical sensors using wavelength-shifting and light-guiding techniques. One example is the Wavelength-shifting Optical Module (WOM). It utilizes a wavelength shifter-coated transparent tube inside a quartz pressure housing to detect the UV part of the Cherenkov spectrum. The incident light is shifted from the UV to the blue. A large fraction of the shifted photons are trapped in the transparent tube under total internal reflection and are guided towards small PMTs at the ends of the tube. These concepts allow for large, scalable, light-sensitive areas with very low dark noise from the small-diameter PMTs needed for readout.