MAGIC, the Major Atmospheric Gamma Imaging Cherenkov telescope, is a high altitude (2200 m a.s.l.) system of two Imaging Atmospheric Cherenkov Telescopes (IACT). It is located at the Roque de los Muchachos Observatory on the Spanish island of La Palma in the Canary Islands. MAGIC is sensitive to Cherenkov radiation emitted in the Earth's atmosphere and detects air showers created by incident gamma rays. Each telescope has a mirrored surface of 17 m in diameter, which reflect and focus photons from the air shower onto imaging cameras, each with 1039 photomultiplier tubes.

In this article we want to send you with Derek Strom on one of the regular shifts to the telescope in la Palma:

A report from a MAGIC Telescope Shift on La Palma

Packing for a shift as an operator at the MAGIC Telescope on La Palma in February is no easy task. One of the seven Spanish Canary Islands, La Palma has a tropical semi-arid climate, with year-round average temperatures above 20 degrees Celsius, making it a popular destination for sun-seeking winter vacationers. It should be simple, right? Swimsuit and flip flops. But I, along with three other astroparticle physicists, will be stationed high above the sandy beaches, at the Roque de los Muchachos, 2,200 meters above sea level. On top of the Taburente volcano, nighttime temperatures can easily dip below freezing, and fierce winter storms arrive with little warning. Yet the daytime sun is intense, even in the wintertime. It will be my first time as operator of the MAGIC Telescope, and as I sort through what I can fit into my luggage I'm left with only taking the necessities. Safety shoes? Check. Spare electronics boards? Check. Clothes for four weeks? Check. Winter jacket? Yes, better take that, too. That doesn't leave much room for the swim trunks... well, better pack them, too, just in case. 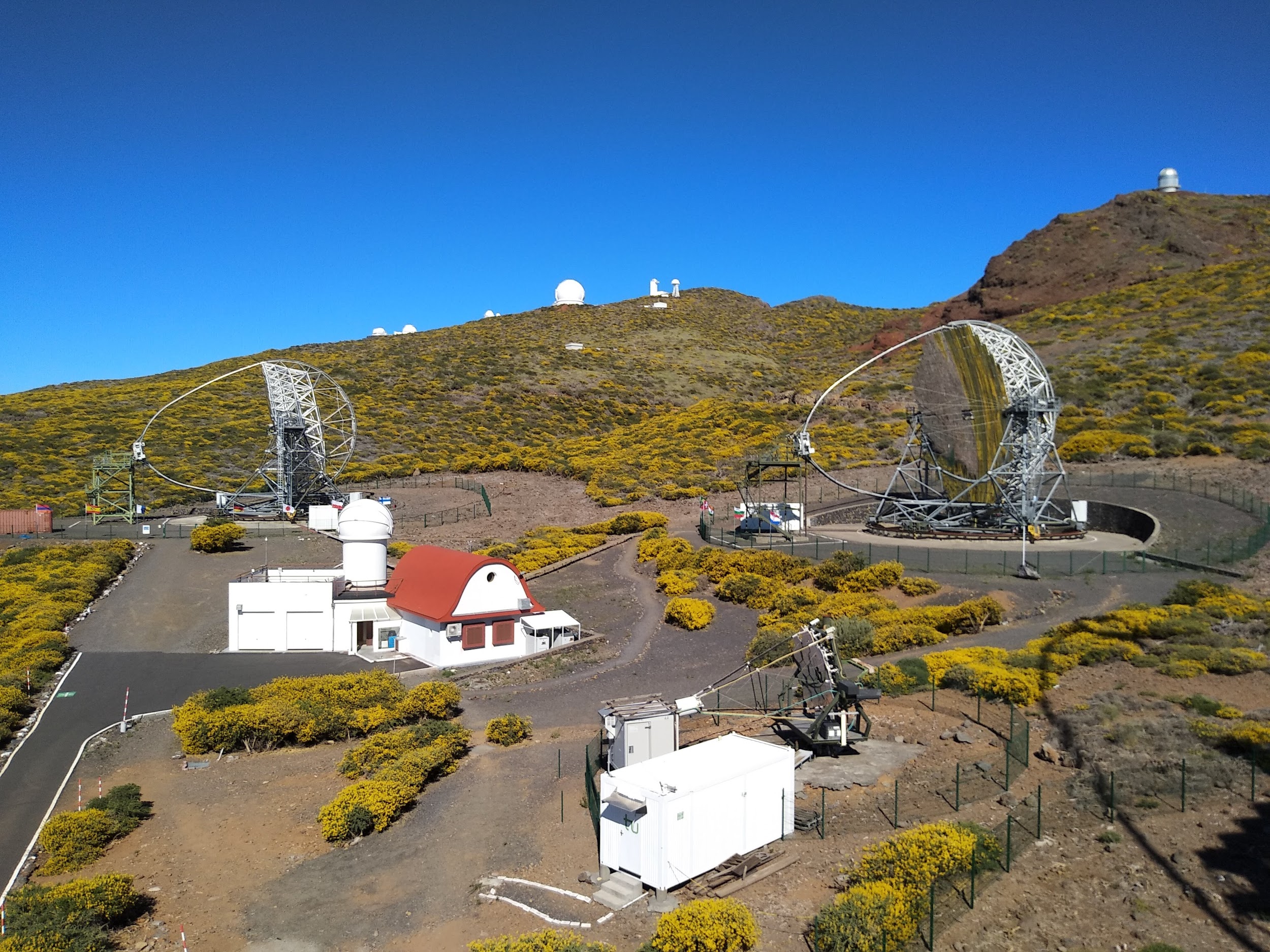 The MAGIC Telescope site at the Roque de los Muchachos.

The MAGIC I and II Telescopes, built in 2004 and 2009, respectively, are a system of two Imaging Atmospheric Cherenkov Telescopes (IACTs) designed to detect light from Gamma Ray induced air showers in the Earth's atmosphere on clear, dark nights. Each telescope has a 17-meter diameter parabolic dish made of highly reflective, segmented mirrors, and a camera system composed of 1,039 sensitive photomultiplier tubes (PMTs), which are optimized to detect the faint flashes of Cherenkov light. The support structure is constructed of strong, but lightweight carbon fiber rods. Powerful drive motors can point the 67 metric ton telescopes to any position in the sky in less than 30 seconds. This is critical to observe Gamma Ray Bursts, one of the key scientific objectives of the telescope's mission. 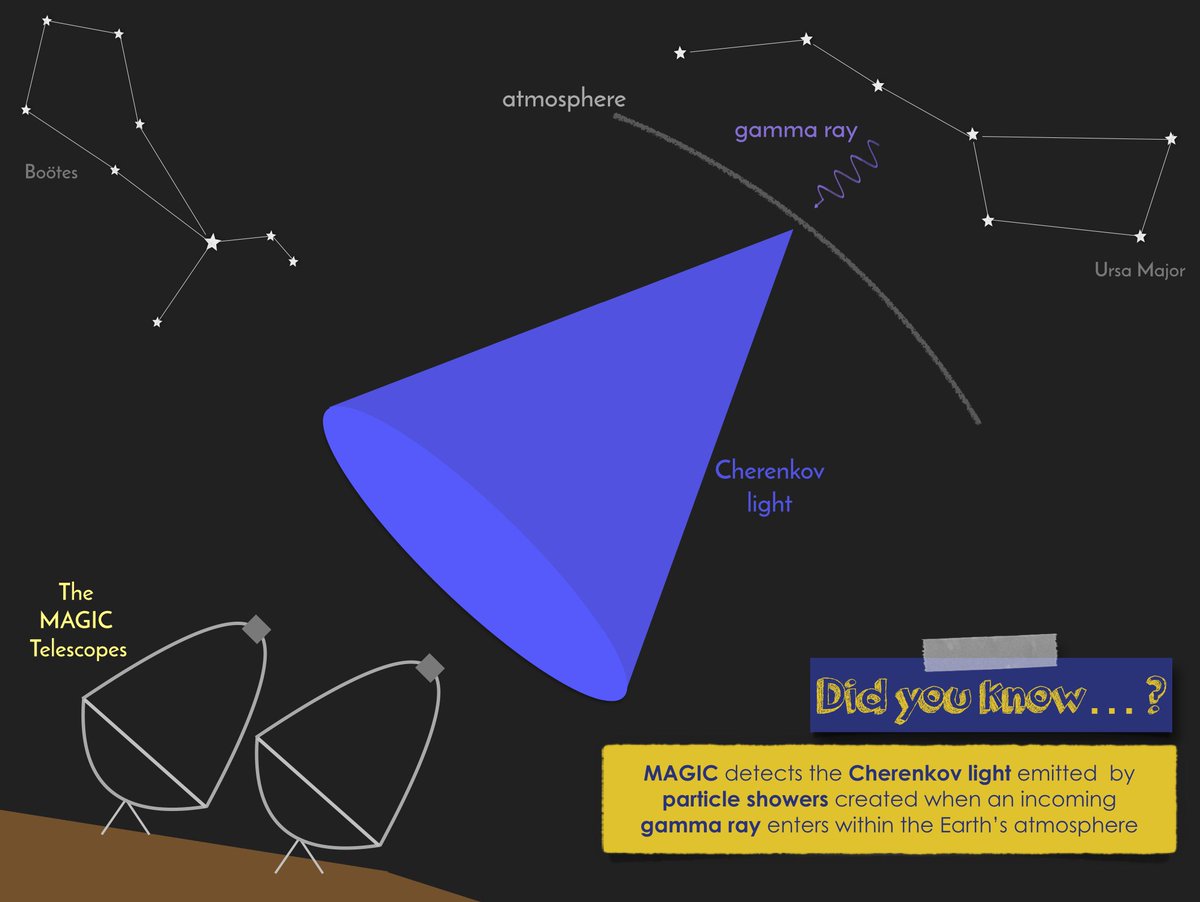 On the island, I meet up with my shift crew for the next several weeks for a fish lunch at a sea-side restaurant. It will be our last taste of civilization before heading up to "The Roque". We exchange stories of previous shifts, give advice for new-comers, and plan out our meals for the weeks ahead, as we'll be doing all the cooking from now on. After packing the car full with our luggage and groceries, we begin the windy 36 kilometer mountainous drive up to the telescope site, our new home. 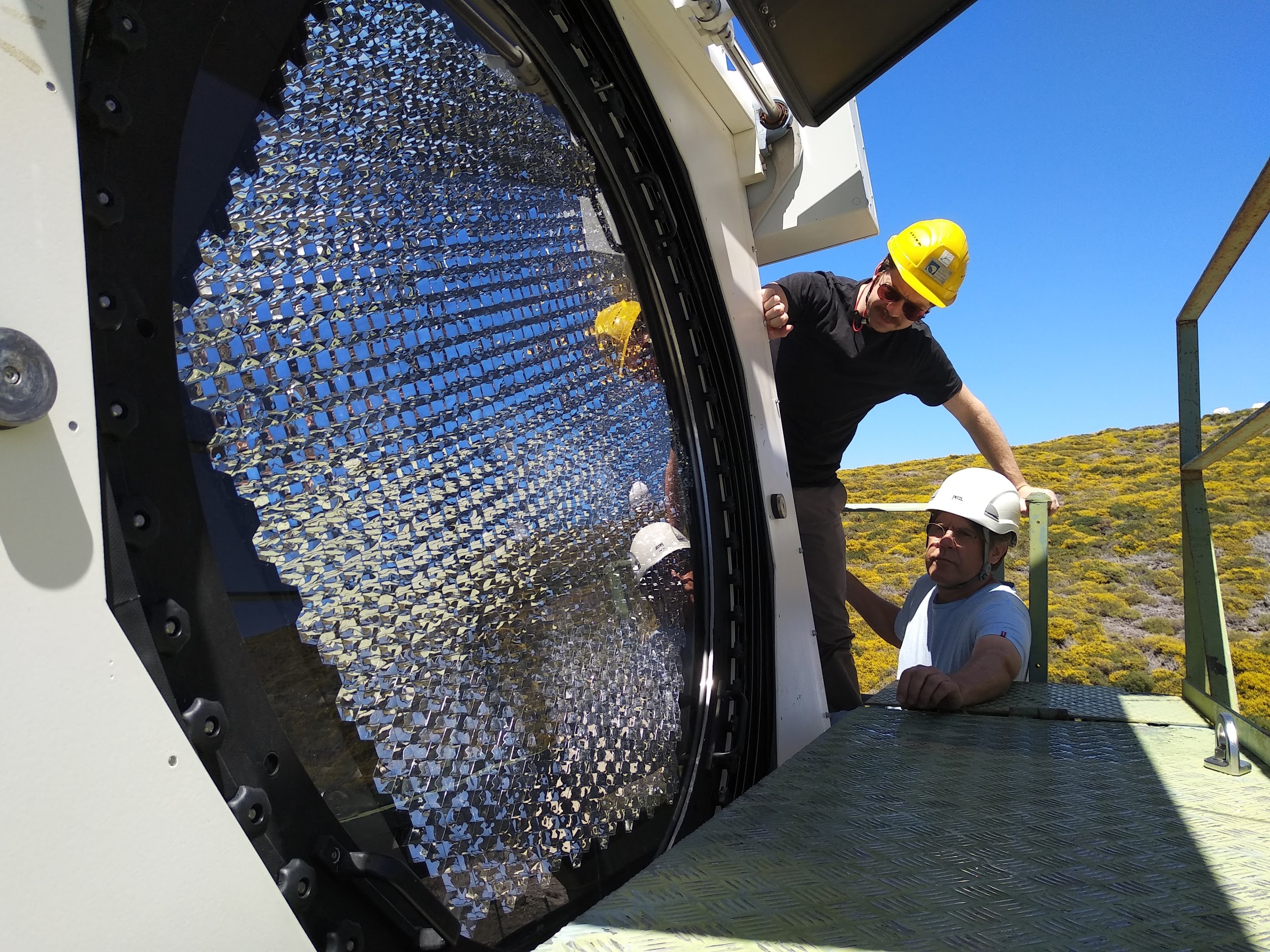 The MAGIC I camera.

We begin each evening by "warming up" the telescope's electronics. We turn on the readout and trigger electronic crates and PCs to give them ample time to wake up before beginning observations. Generally this is done one to two hours before sunset. Meanwhile, two of the crew members are back at the apartment preparing the evening's meal. After checking that the systems are on and ready for data-taking, the four of us gather for dinner and to watch the sun go down over the ocean.

Of the many benefits of working in an international collaboration such as MAGIC, one has to be the wonderful variety of cuisine we have on shift. Tonight our Spanish colleague has prepared croquetas, a small breaded food roll filled with ham and cheese. With our bellies full, we make the short one kilometer trip back to the telescope just as the sun is setting, and settle in for the long night of observations. We have many tasks to do before the first observations may occur. Luckily we have a checklist with protocols to follow to prepare the telescopes, and a detailed schedule of sources to observe. We "unpark" the telescopes from their secure locked positions, align their mirrors using a bright star as a source, and calibrate the camera systems. We check our list of sources for the night. There seems to be a question about one of the sources on the schedule. Better to call the "on-call" scheduler. Okay, everything is clear now. With the system warmed and prepared to take data, we are ready to begin our observations. Now we wait for the final twilight to fade into darkness. 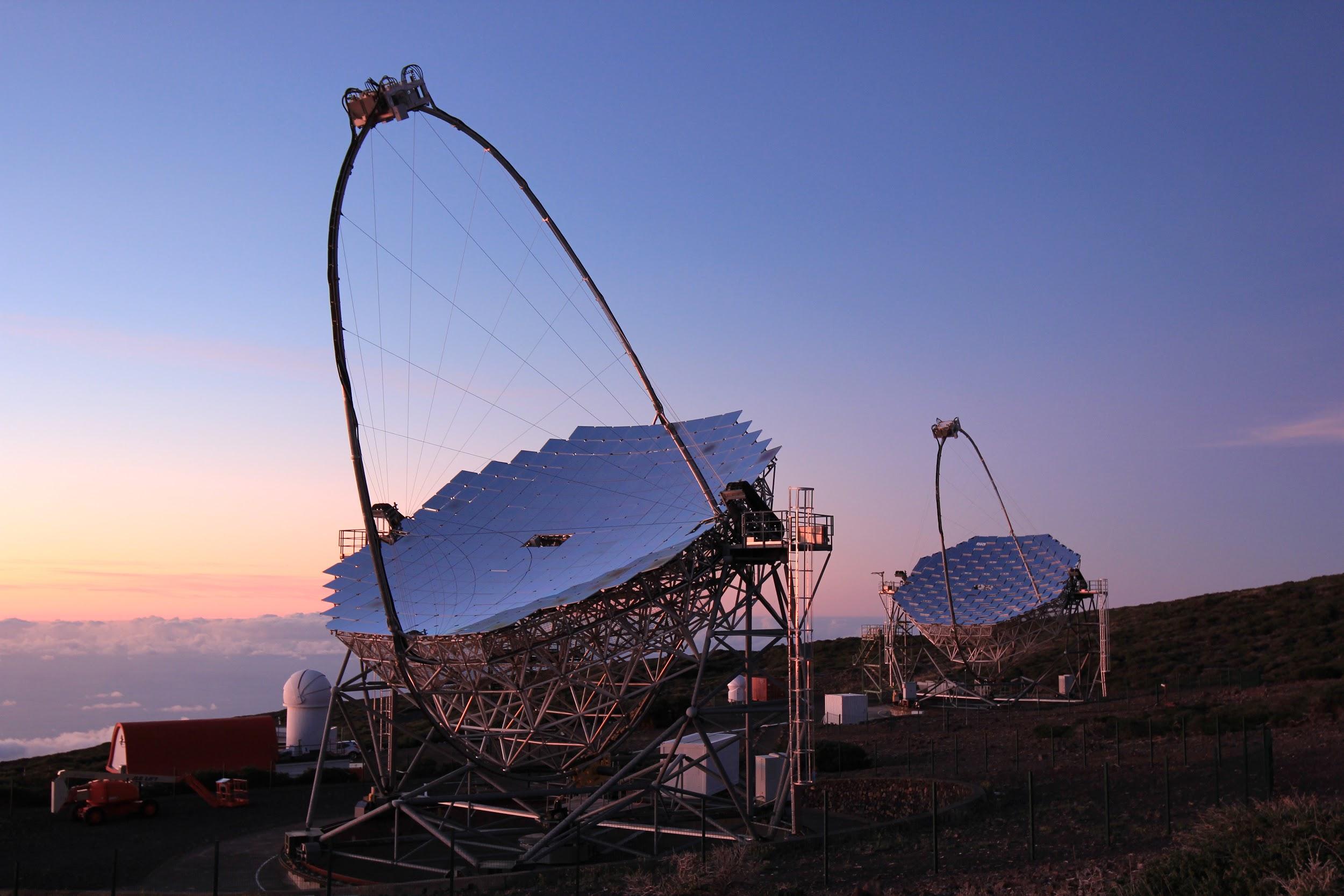 The MAGIC II (left) and MAGIC I (right) telescopes.

Generally there are three shifters in control of the telescopes each night, while the fourth has a night off to rest. At 2,200 meters, the altitude, and reduced oxygen level,  can have strange effects on the body. Typical symptoms can include headaches and tiredness. This is why we rotate the shift crew each night, so that every fourth night you have an opportunity to recuperate. But being our first night at the telescope there's too much excitement, and all four of us are there in the control room, hovering around the monitors, checking and rechecking the displays, anticipating to observe the first source. And just maybe we all want to refresh our collective memories of the procedures to operate the telescope after some hiatus.

Now both telescopes are ready for observation, and the skies are clear and dark. We point to our first source, the Crab Nebula, a giant supernova remnant created from a violent star explosion first observed just over 1,000 years ago. Located 6,532 light years away from Earth, in the constellation Taurus (the Bull), the Crab Nebula is our so-called "standard candle", a well-known Gamma Ray source emitting a nearly constant flux of high energy photons. Immediately after we begin observing we see the collection of air showers created from the Gamma Rays hitting the Earth's atmosphere build up in the data.

We make similar observations throughout the night, pointing to different galactic and extragalactic Gamma Ray sources, always following the schedule to the very minute. Generally the system is highly automated, even down to retrieving the precise coordinates in the sky in which to point the telescopes. Nonetheless, we keep a close eye on the data in real time to check for any anomalies. We continually monitor the status of the weather conditions, the electronics and power supplies, the data and trigger rates, and the fluxes arriving from the source. Occasionally there is some downtime, for example while observing a single source for multiple hours continuously, or when adverse weather conditions, such as clouds or high winds, make observations impossible. Then we may take some time to respond to comments on a recently drafted paper, write a chapter of a thesis, or listen to some favorite songs to help keep us alert and focused during the night. Oh, and very importantly, to refresh our coffee mugs. 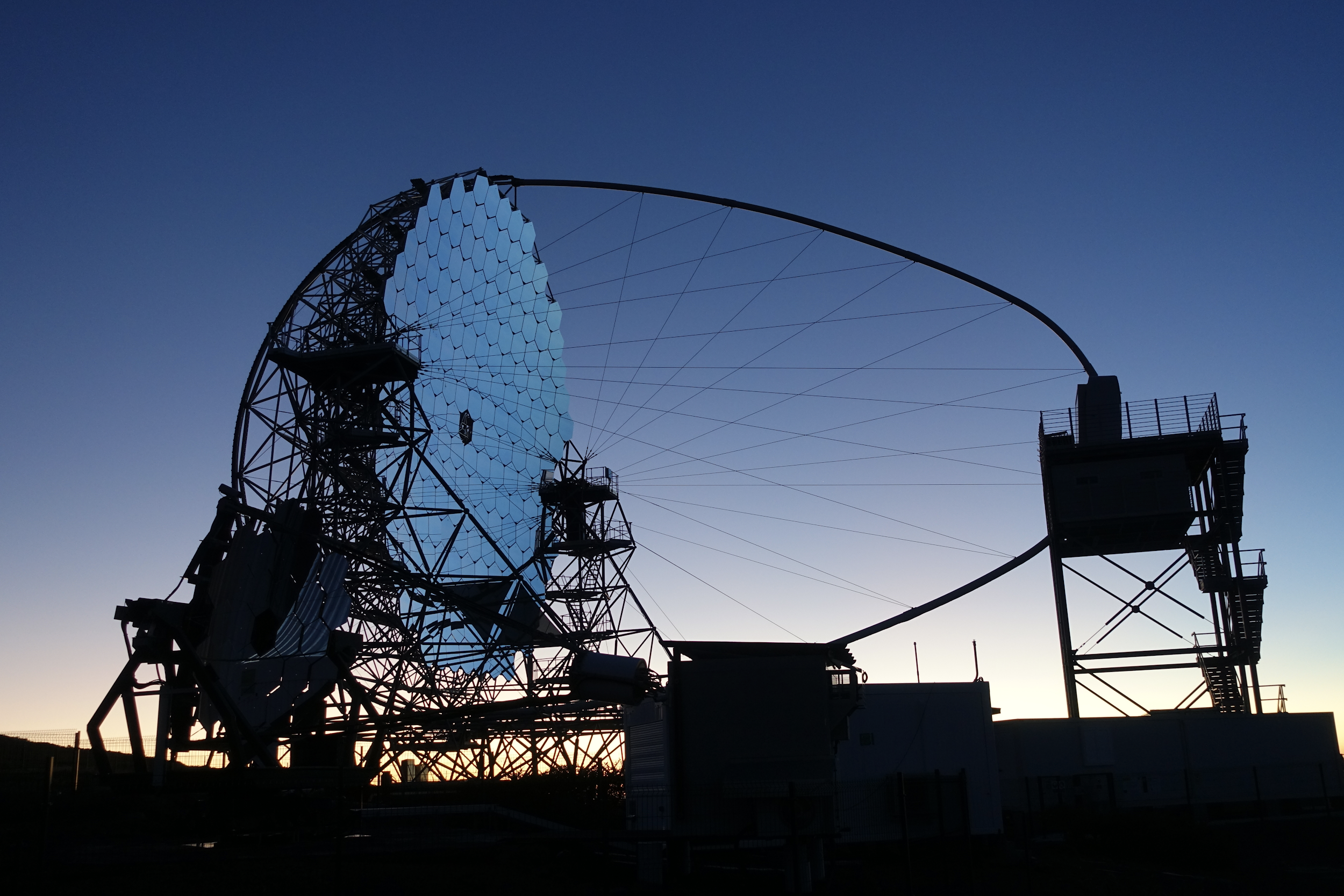 As the vernal equinox is approaching, where the hours of daytime and nighttime become equal, the nights are long, and after nearly 12 hours of observations we are very tired. It's been a successful night of observations, but the work is not finished. Now we must reverse the startup procedure. We park the telescopes in their safe positions for the day, and turn off the electronics to conserve energy. At sunrise we are finished with the shift, and we head back to the apartment to eat a small breakfast (I'm a fan of gofio, a local Canarian corn meal, mixed with honey and milk). Then, finally, we retire to our light-proof quarters, and go to sleep. We will awake in the afternoon, take some time to see if any important news has arrived from our schedulers for the next shift, and then repeat. 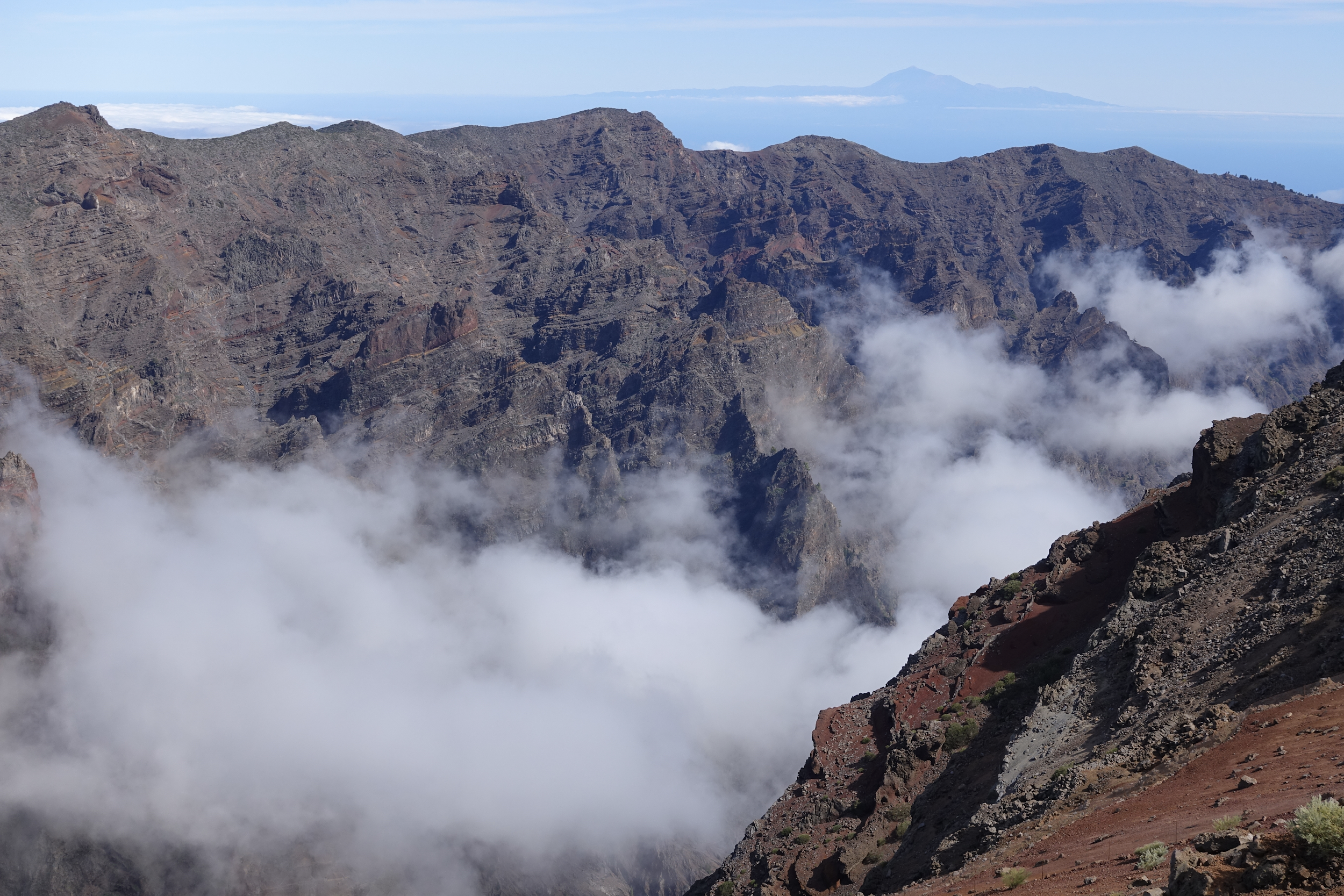 View from the Roque de los Muchachos to the north.

View into the Caldera de Taburente with Mount Teide in the background.

On my off day I take a short hike up to the summit of the Roque de los Muchachos, where I have a 360 degree panoramic view around the island. The scenery of the Caldera de Taburente, a massively eroded crater in a now dormant volcano, is absolutely stunning, even otherworldly. To the north are the MAGIC telescopes and the newly constructed Large-Sized Telescope (LST1), the first installment of the next generation IACT telescopes, and part of the future Cherenkov Telescope Array (CTA) Observatory. Also nestled among them are optical telescopes, including the Gran Telescopio Canarias, which is the world's largest single-aperture optical telescope, and the William Herschel Telescope, which discovered first evidence for Sagittarius A*, the supermassive black hole at the center of our Milky Way Galaxy. Looking to the south, a long spine stretches all the way down to the wild Cumbre Vieja Natural Park. 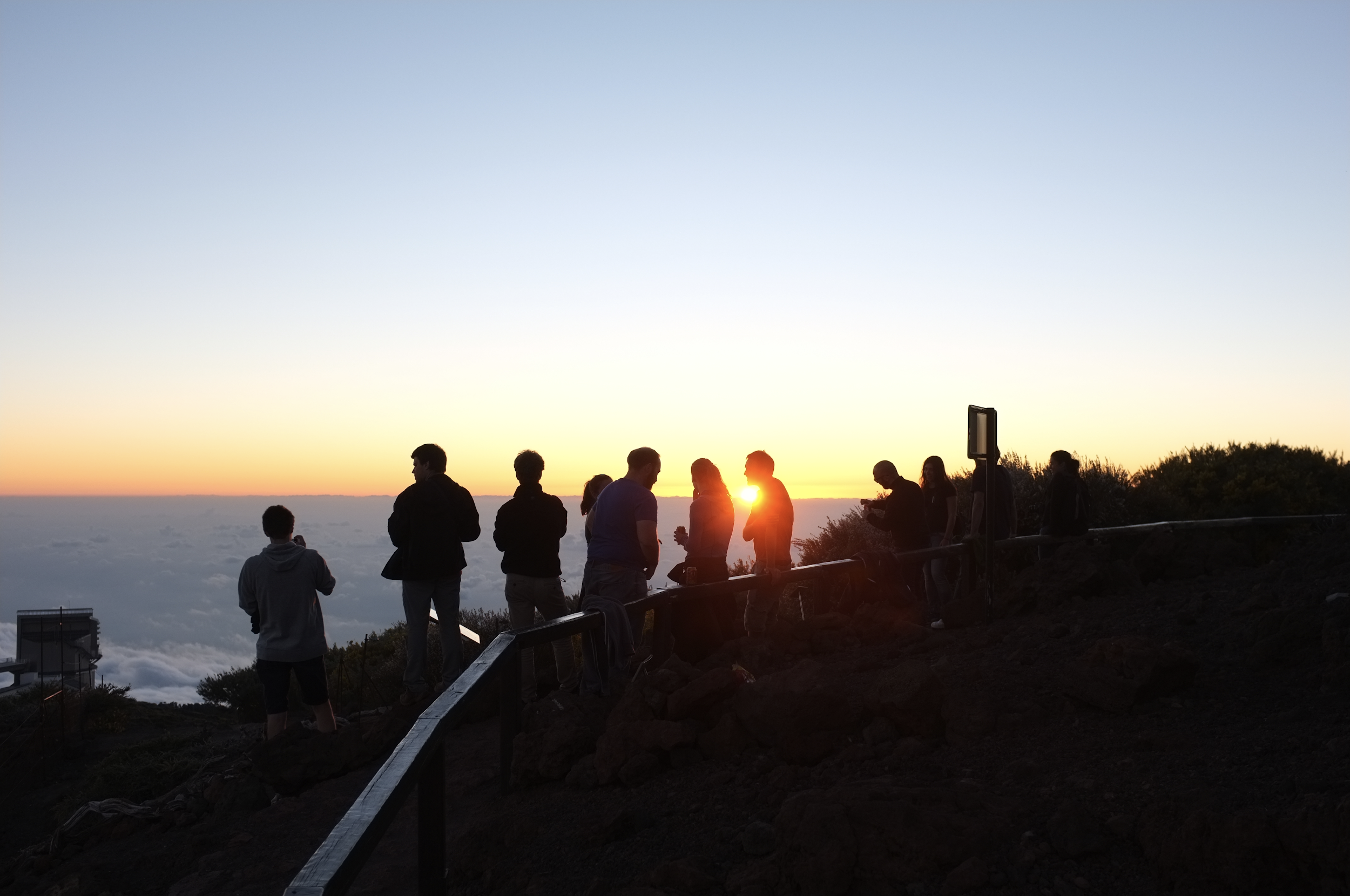 On clear days you can see prominent Mount Teide to the east on the neighboring island of Tenerife. At 3,718 meters, it is the highest point in Spain. And to the west is the vast North Atlantic Ocean. From this vantage I think about previous explorers, such as Christopher Columbus, whose presence is felt all around the Canary Islands. He would stop here with his crew to restock his ships before crossing the Atlantic towards the Americas. At this moment, looking up, I feel small, and humbled by the expansiveness, and beauty, of the unknown universe. And then I wonder... did Columbus remember to pack a toothbrush?

Derek Strom (This email address is being protected from spambots. You need JavaScript enabled to view it.)